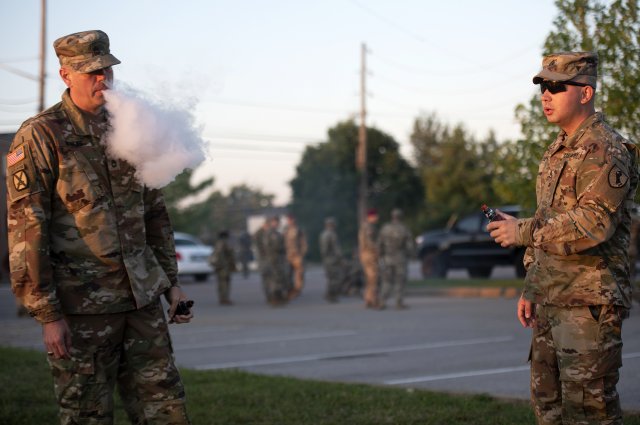 SEPTEMBER 30, 2019 – The many varied applications of CBD oil along with Congressional green lighting for development and production have led to a dramatic increase in personal use and inclusion in in a wide array of consumer products.

In the midst of all the buzz, Army Substance Abuse Program officials from Fort Knox are warning community members to exercise caution.

“Because the [Food and Drug Administration] does not certify the contents of these products, persons who use them are trusting the companies who produce them to accurately measure and label all contents and ingredients, and provide proper dosing instructions,” said Bill Taylor, Army Substance Abuse Program manager and Community Ready and Resilient integrator. “So, there is a risk that using these products may result in a positive marijuana test.”

Issues surrounding the use of hemp and CBD oils became complex Dec. 20, 2018, when the Agriculture Improvement Act of 2018 was signed into law by President Donald Trump. The resulting concerns led officials from U.S. Army Installation Management Command to release a letter urging civilian employees to steer clear of CBD oil.

“The 2018 Farm Bill legalized hemp-derived products under certain conditions, but it does not change the policy on marijuana use under the Federal Drug Free-Workplace Program,” wrote Joyce Perry, a member of the IMCOM Drug Testing Program with. “While the Farm Bill removed certain hemp-derived products such as CBD from the Controlled Substances Act, Schedule I, the Food and Drug Administration does not certify levels of THC in these products. So, there is a risk that using these products may result in a positive marijuana test.

“Under the DFWP, there is no legitimate medical explanation for a marijuana positive test result other than a verified prescription for Marinol®, Sativex® or generic equivalent.”

The most recent Army Regulation 600-85 regarding the use of hemp products – dated Nov. 28, 2016 —makes it clear that Soldiers’ use of marijuana or any compound or derivative of it is strictly prohibited in the Uniform Code of Military Justice.

The regulation, in Article 112a, explains further that Soldiers are prohibited from using hemp, any oil made from it or any form “for the purpose of inducing excitement, intoxication, or stupefaction of the central nervous system.”

While that regulation remains in effect for Soldiers, it does not pertain to family members, federal civilian employees or contractors.

One of the provisions of the 2018 Farm Bill includes language supporting the production of hemp and CBD oils. A Dec. 10, 2018, statement released by the U.S. Committee on Agriculture, Nutrition, & Forestry, touts hemp as a legal agricultural commodity.

Problems occur in the certification of those products, according to Taylor.

“Studies have shown that some CBD products’ labeling does not accurately reflect their content,” said Taylor.

He highlighted one recent study that revealed 69% of 84 CBD oil products that were tested had contents that were either inconsistent with what was on the label or missing altogether from the label. These included cannabinoids with THC levels as high as 6.4 mg/mL. The maximum THC levels allowable under federal regulations is up to 0.3% — the legal limit for hemp as spelled out by the Farm Bill.

In a July 24 memorandum released by Ronald Flegel, director of Division of Workplace Programs at the Center for Substance Abuse Prevention, he warned that federal job applicants and employees within all Executive Branch agencies “will continue to be tested for marijuana using the established THCA test cutoffs in section 3.4 of the Mandatory Guidelines using Urine.”

Hemp supporters talk up many of the benefits of CBD oil, which include pain relief from menstrual cramps and generalized pain. According to Dr. Peter Grinspoon at Harvard Medical School, known benefits include childhood epilepsy syndromes, reducing anxiety, seizures in the brain, chronic pain and inflammation due to arthritis, and inhibiting inflammatory and neuropathic pain.

However, a recent sharp rise in vaping-related lung diseases is causing medical officials to look more closely into hemp products since many companies sell CBD oils for use with vaping pens. Because of the uncertainty behind what is causing the illnesses, Taylor is recommends avoiding CBD oil altogether.

“Choosing to trust these companies and the accuracy of their claims is choosing risk,” said Taylor — “the risk of a positive drug screen and the career impacts that could come with it.”