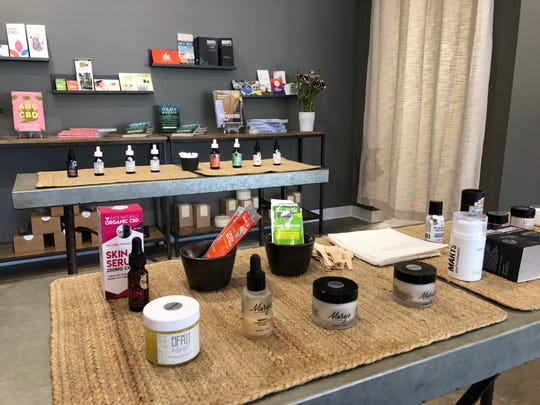 Phoenix resident Genevieve Hendricks is experimenting with CBD products to manage her chronic back pain.

Hendricks has been a customer of Kaya Hemp Co. since it launched as an e-commerce site in January and went to its newly opened brick-and-mortar location at 6102 N. 16th Street on June 7.

Hendricks said owner Cathleen Mitchell has helped her try different products in search of what works best for her. So far, she’s found it calms her day-to-day anxiety and helps her feel more relaxed.

“There’s no reason, in my mind, to be skeptical,” Hendricks said. “I would say if you have pain, it’s worth a try. It doesn’t mean you’re locked into it.’

Hendricks is one of many who have made CBD an industry already generating up to $2 billion in sales and expected to grow.

In Arizona, a legal change recently allowed farmers to grow hemp, from which CBD is derived.

Dozens of shops from Scottsdale to Tempe sell CBD products. The hemp extract is finding its way into everything from food to deodorant and pet treats.

“When I first started doing my research, there were maybe two stores in Phoenix that were dedicated to CBD,” Mitchell said. “Now … it’s really kind of everywhere.”

Hemp and marijuana both come from the Cannabis sativa plant.

Cannabidiol, or CBD, is a chemical compound found in cannabis plants. Unlike THC, the psychoactive chemical compound in marijuana that creates a “high,” CBD is often derived from hemp and does not alter the user’s mental state.

Under the 2018 farm bill, hemp’s legal definition was changed to be a separate substance from marijuana. Hemp isdefined as any cannabis plant or derivative with 0.3% or less THC content. President Donald Trump signed the bill into law in December 2018.

This change, effectively decriminalizing hemp and CBD at the federal level, opened the “floodgates” for the industry, Mitchell said.

Senate Bill 1098, signed by Gov. Doug Ducey in May 2018, allowed the Arizona Department of Agriculture to issue licenses to Arizona farmers wishing to grow hemp starting in August. The start date was moved up to May 31 after the farm bill passed.

Arizona’s first hemp seeds were sown Friday in Hyder, a farming community between Phoenix and Yuma.

Integrated CBD, which aims to supply CBD to other companies, farms the land.

The Scottsdale-based company now has the largest hemp operation in the state, said Brian McGrew, Industrial Hemp Program manager at the Arizona Department of Agriculture.

The Industrial Hemp Program has received a “couple hundred” license applications so far and is working through them, McGrew said.The licenses are to grow, harvest, transport and process hemp.

One hundred to 150 acres of Integrated’s 10,000-acre farmland was planted over the weekend, said Patrick Horsman, the company’s president and CEO. Integrated plans to plant 3,000 acres this year, which will produce an estimated 7.5 million pounds of hemp in the October harvest, he said.

The company is also building a 154,000 square-foot facility in Phoenix to extract CBD from the hemp, Horsman said.

“Being able to invest in something like 30 days after prohibition is always an interesting opportunity,” Horsman said.

The company is in talks with product manufacturers for supply agreements, as well as universities for research and development, he said.

“Everyone is trying to get into this space,” Horsman said.

A photo of the building that will house Integrated CBD’s extraction facility. Logos have been digitally added.

Attorney Justin Brandt of the Scottsdale-based Rose Law Group, an attorney focused on the cannabis industry, said he has seen an uptick in CBD-related questions in the past six to nine months. Many clients are requesting help with navigating regulations and ensuring compliance as they look to enter the hemp industry.

Hemp manufacturers are required to obtain licenses, but CDB shop owners are not required to get a special license.

Dr. J. Julian Grove, an anesthesiologist and pain management specialist practicing in Phoenix, became interested in CBD after his patients began discussing it with him. Many were looking for pain medicine alternatives with fewer side effects.

Many pain medications have prominent, often severe potential side effects, Grove said. As president of the Arizona Pain Society and a former member of a state task force to combat the opioid epidemic, he’s seen the wide-reaching impact of opioids and is passionate about CBD’s potential as an alternative, he said.

“I think what we’re starting to see is the acceptance of CBD because of its pretty darn low side-effect profile,” Grove said.

CBD has well-vetted anti-inflammatory properties, and many other potential uses are being studied, Grove said. As studies get more thorough, he sees it as something that could offer patients medical benefits in several realms, such as cardiovascular health, sleep, anxiety and nerve pain.

Grove considers himself an early adopter of CBD in the medical community, which still maintains some skepticism.

CBD is often marketed as a natural cure for pretty much any medical condition, but many of its supposed benefits have not been proven. The FDA has approved CBD as a treatment for certain types of epilepsy, but hasn’t endorsed any others uses. The agency recently held a public hearing to solicit data about cannabis products.

Through his practice and business,The Physician’s Choice CBD in Scottsdale, Grove continues to promote research on CBD’s potential medical uses, he said.

“We have a laboratory, so to speak, of thousands of pain patients,” Grove said. “Those that have tried our CBD, we are absolutely collecting data and presenting that. Ultimately, to be validated by the medical field we all want data, we know that that’s what we have to get and that’s exactly what we’re doing.” 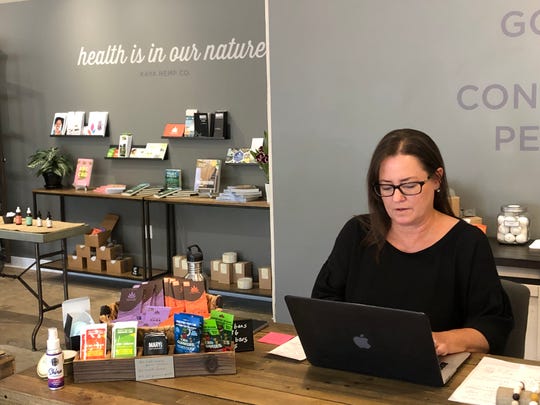 While CBD’s benefits continue to be researched, Mitchell needs no convincing.

A year ago, she was told she’d need surgery on her hip for a torn muscle and other issues, she said. She began experimenting with CBD products, which she said led to “remarkable” improvement.

“By using CBD, a topical specific to that area, I was able to pretty much walk normally again, go back to my regular routine, and avoid surgery,” Mitchell said.

She has sung its praises ever since, starting her business and recommending treatments to loved ones. Her elderly dogs are no longer as slow after their walks, she said. Her mother is taking CBD for symptom relief during chemo treatment, and her dad has found relief for his neuropathy after 20 years of trying different treatments.

“It’s changed his life, he can sleep at night now,” Mitchell said.

While the state does not regulate those who sell CBD products, the Industrial Hemp Program will keep a leash on the local supply chain through licensing manufacturers.

The main goal is to ensure the hemp being produced has THC levels within the legal threshold, McGrew said.

This process should lead to a gradual increase in product quality once production in Arizona is underway, McGrew said.

“There’s gonna be some growing pains; this is a huge learning process for not only Arizona but everybody across the country,” McGrew said.

“The CBD landscape was a little bit ‘wild, Wild West,'” Grove said. “There was not a lot of people doing independent, third-party testing.”

One of Mitchell’s goals is to promote education on CBD and hemp products through her business, she said. While buyers should pay attention to the hemp’s source, third-party product testing is the most important signifier of quality, Mitchell said.

“That transparency is critical to knowing that you’re getting a quality product,” Mitchell said.