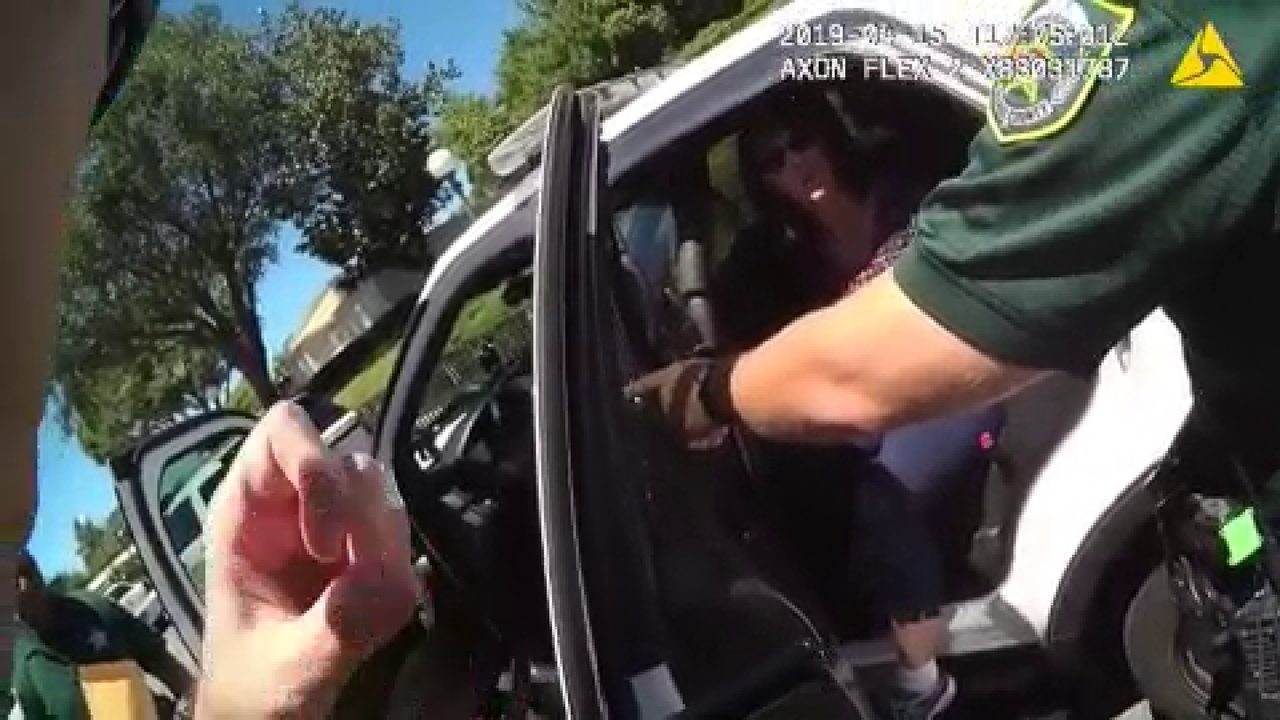 ORANGE COUNTY, Fla. – Body camera video recorded by the Orange County Sheriff’s Office deputies involved in the arrest and transport of a 69-year-old grandmother on suspicion of CBD oil possession at Walt Disney World shows the deputies worked to accommodate her when she started having a medical episode.

Hester Burkhalter, of Tennessee, was arrested April 15 when Disney security found a vial of cannabinoid oil, or CBD oil, in her purse when she handed it over to be searched at Magic Kingdom. The charges were later dropped.

Burkhalter said she has arthritis and her doctor instructed her to try the oil to help.

It is illegal to possess CBD oil in the state of Florida without a medical marijuana card; however, federally the oil which is extracted from the flowers of marijuana plants but doesn’t produce a high, is legal.

The 69-year-old said the off-duty deputy who detained and arrested her never asked if the oil contained THC and treated her unfairly when she asked for medical help. Her family announced it plans to sue the Sheriff’s Office and Walt Disney World.

More than an hour of body camera footage reviewed by News 6 does not show mistreatment.

Burkhalter, was one of two people stopped with CBD oil at the security checkpoint on April 15, according to the video. Another person had a vape pin, cannabis and CBD oil, a deputy said in the video.

According to the body camera video, when another deputy arrived to transport Burkhalter and the other person to the jail center and placed them both in the back of his Sheriff’s Office patrol SUV, Burkhalter said she couldn’t breathe.

“I can’t breathe, I feel like I’m going to pass out,” Burkhalter is heard saying in the video, adding that she gets claustrophobic. She asked the deputies if she could be transported alone.

The deputy allowed the 69-year-old out of the back seat while he called his supervising lieutenant to request another vehicle.

“The older female said she gets claustrophobic, and feels like she’s going to pass out, and wants somebody else so she can go by herself,” he said in the call.

According to the video, only four deputies were in the area and two of them were at the park.

Even when a Disney employee said to the deputy, “She’s delaying her own transfer” and “You can’t to convince her?” The deputy responded, “No, I’m not driving anywhere with her if she’s claiming a panic attack.”

Another deputy adds, “She says she gets claustrophobic in the back of the car and she just threw up.”

After waiting a few minutes to hear back from his supervisor, the deputy was told to put Burkhalter in the front passenger seat and another patrol car would be sent to pick up the other person suspected of CBD oil possession.

The video shows the deputy rearranged his patrol car to allow Burkhalter to sit in the front seat and even cleaned off the seat, and helped her into the SUV.

On the way to the Orange County Jail center the deputy answers Burkhalter’s questions about processing and what to expect during her first appearance in front of a judge.

He asked her if the “AC is hitting you at all” to which she says it is.

“This is much better. Thank you so much,” she told the deputy, thanking him several times during her transport. “I couldn’t breathe back there.”

After they arrived at the jail center, at Burkhalter’s request, the deputy readjusted her handcuffs and helped her out of the front seat.

“Let me know what you need me to do for you,” the deputy said.