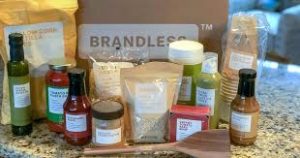 Woo hoo! It looks like Brandless, the hip company based in San Francisco, will be offering CBD oil soon, as well as several other CBD products. In fact, these CBD products are already listed on the Brandless website (see links below). This is big news! If you visit these Brandless CBD oil product pages now, you can click on the “sign up” link to have Brandless email you when they’re available to order. Although Brandless doesn’t give a date, a Brandless employee stated recently on the official Brandless Facebook page that these CBD items be available soon.

CBD stands for cannabidiol. CBD is a cannabinoid found in the essential oils of the cannabis plant. Yes, that’s technically the same plant as marijuana but “CBD oils” sold in America are extracted from “hemp plants,” cannabis varieties that do not contain THC (tetrahydrocannabinol), the substance in marijuana plants that makes you high. Further, most CBD oils are “full-spectrum,” unless they state otherwise, meaning they actually contain several other beneficial cannabinoids in addition to CBD. Full spectrum CBD oils also contain a variety of terpenes, another class of beneficial substances. The relative composition of cannabinoids and terpenes in CBD oils, and other CBD products containing CBD oil, will vary depending on the exact hemp variety used to extract the oil but they all contain CBD.

What Are Cannabinoids & What Are the Benefits?

Cannabinoids are natural substances that are structurally similar to and mimic endocannabinoids naturally produced by the human body. In fact, they’re so similar they can directly interact with endocannabinoid receptors in the human body. Cannabinoids have been used as as “folk medicines” for thousands of years to treat various ailments and diseases. They are probably best known for reducing inflammation. People with arthritis, lupus, and other ailments causing inflammation often find that CBD oil eases these symptoms. People also use CBD oil to ease pain, headaches, anxiety, gastrointestinal issues, and more. CBD oil is sometimes recommended to patients who have undergone cancer treatment and are dealing with nausea and vomiting as a result.

The endocannabinoid system found in humans and other animals (and fungus!) is involved in maintaining homeostasis, a sort of master control system designed to regulate all other systems in our bodies. The endocannabinoid system helps us maintain a healthy equilibrium and keep our systems in balance. Plants, including hemp, have cannabinoids to ward off herbivores and pathogens. Cannabinoids also help plants maintain homeostasis as the environment changes. For example, they can help plants balance against the effects of freezing temperatures or water loss due to wind. The endocannabinoid system’s role of maintaining homeostasis and balance in organisms as diverse as humans and plants sounds a lot like restoring the ying and yang or balancing the chi in ancient forms of eastern medicine. Western medicine is still early in the process of discovering, or rather rediscovering, the importance of this.

The predominant cannabinoids found in hemp plants are CBD (cannabidiol), CBN (cannabinolic acid), CBG (cannabigerolic acid), CBC (cannabichromenic acid), and CBND (cannabinodiolic acid). Cannabinoids are most highly concentrated in the oils of the female flowers (in the secretion cavities of the glandular trichomes) of hemp but they’re also found in hemp stalks, leaves, roots, seeds, and even pollen. More than one hundred unique cannabinoids have been identified in hemp plants. As more scientific studies are completed, and more patients report their personal results to their doctors, some members of the medical community are becoming more open to recommending CBD products to their patients.

Terpenes are aromatic chemicals that are secreted by the same glands that secreate CBD and other cannabinoids. These are the chemicals that give various hemp oils and CBD products their unique fragrances and tastes. Terpenes are thought to confer many benefits, some of which we are just beginning to understand. Just like cannabinoids, the terpenes in full spectrum CBD oil work synergistically.

Advantages To Ordering CBD Oil & Other CBD Products From Brandless

First, although the price is not listed yet, it is bound to be better than the competition because Brandless’ prices are always better for quality products. Second, Brandless will no doubt look out for their customers and not allow any pesticide or herbicide contamination in their CBD products. This is a big advantage because many brand name CBD oils have been found to be contaminated with environmental toxins. This is especially troubling since these toxins are always more highly concentrated in the essential oils of a plant.