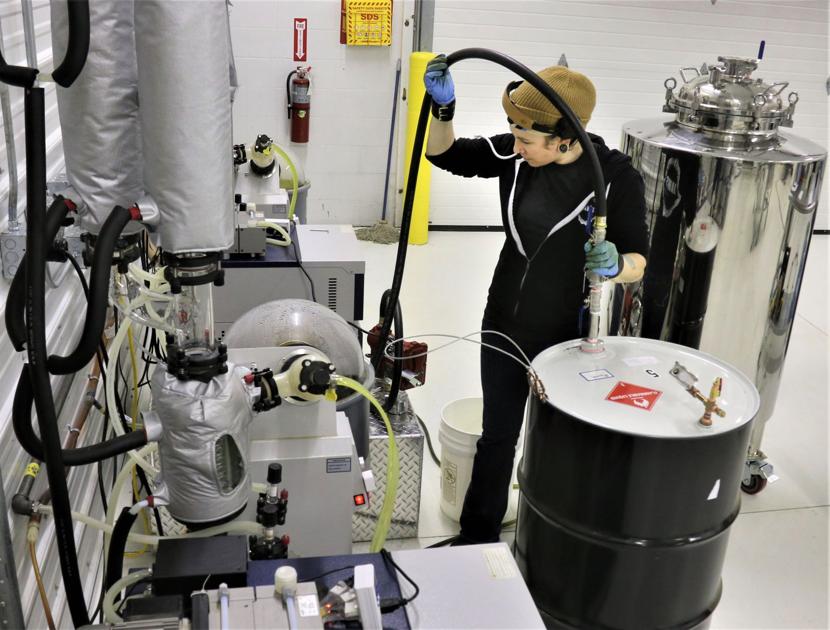 A North Dakota company is ramping up to become one of the state’s first processors of hemp for the cannabidiol, or CBD, market that has become increasingly popular with consumers for its perceived health benefits.

Prairie Products LLC, a company in south Fargo, uses ethanol to extract the oil from hemp, which is related to marijuana but with many industrial uses.

It does not buy hemp, but processes it for small-scale growers on a split-profit marketing deal not seen with the large-scale agriculture commodities typical of Upper Midwest farms.

The company started acquiring processing equipment about a year ago. The 6,000-square feet of space it leases includes office, biomass processing and loading facilities.

Initially, Prairie Products bought hemp biomass from Oregon to get the plant started in June 2019. Last fall, they started seeking hemp locally and brought in their first batches in January. All told, the company has gone through about 10,000 pounds of hemp biomass — the equivalent of about 10 acres.

Tom Kading, the company’s chief financial officer and chief operating officer, says most farmers of hemp for CBD oil are growing fewer than five acres of the crop.

The company doesn’t buy hemp for food or fiber markets, but it is retaining most of its fiber byproducts and is looking for feed or other market applications.

Hopping to hempVeronica Michael, the company’s chief executive officer and director of sales and marketing, and Kading say the hemp market initially gained viability after the 2014 Farm Bill, which allowed growing hemp for the seed market.

Things opened up further in December 2018 when the new federal farm bill passed, allowing all 50 states the opportunity to go into the hemp farming and CBD processing if they chose to allow it.

In August 2019, the price of CBD oil declined sharply, in part because a rush of new processors coming online, Michael says.

Another company, 1881 Extracting, is building a plant near Hillsboro, N.D., using a carbon dioxide processing method. Farmers say a third company handled 2019 crop at a Fergus Falls, Minn., plant. Prairie Products officials say there may be a dozen or so processors in the Minneapolis area.

HarvestThere is a process even before farmers begin to harvest their hemp crop.

Fifteen days before harvest — roughly in mid-September — state inspectors go to the farm to verify that it is “compliant” with potency restrictions. The hemp must be less than 0.3% THC — a tiny fraction of the high-inducing agent found in marijuana.

Before they bring raw biomass into the plant, Prairie Products requires the farmers to send tests to a third party testing lab. Once it qualifies and is brought in, Prairie Products then sends samples to Adams Independent Testing of Fargo to verify check for CBD and THC potencies as well as testing for unwanted metals, pesticides, moisture and molds.

Farmers with large acres are known to use combines, but most harvest by hand for CBD oil, with chainsaws, machetes or weed whips. Farmers often bring the cut stalk into a barn, hang them and air-dry them to about 10% moisture, sometimes with the aid of a dehumidifier. The 2019 harvest was difficult, including post-harvest.

After it’s dried, farmers “shuck” it — cutting small branches off and either place it into a “super sack,” a breathable bag of about 500 pounds. Finally, farmers are responsible for getting the plants to the factory, where it is processed.

Then the farmer has two options.

“We just either give (farmers) that option to either take their oil back or when we market our material we sell it (for them),” Kading says. “I would say nine out of 10 times, this will be the case.”

Under the “split” contract, Prairie Products seeks hemp with CBD content of 10% or greater. after it is harvested and dried. The processor and farmer split the CBD crude oil product based on potency of the biomass — often a 50-50 ratio, with a bigger proportion for the farmer if the CBD potency is higher.

“We’re not promising a check at the end of the season,” Kading says. “We’re saying, ‘We don’t know what the market will be. We’ll process it and bring it to the crude market.”

Price pointsWhen Prairie Products markets CBD oil for the farmer, their commitment simply is to “sell it as quick as we can,” Kading says. The company has sold some to local product retail makers, but largely they’ve been waiting for prices to rise. The company’s crude CBD is sent to other processors to turn into retail products.

The industry could benefit from better quality grading as it goes forward, Michael says. Michael finds hemp prices on the Physical Commodity Exchange, or “PanExchange” website, among others.

Michael says the industry is awaiting the U.S. Food and Drug Administration to come out with clearer regulations, which are expected to be released between March and July. After that, Michael thinks prices might strengthen in the third quarter of 2020.

One of the farmers that Prairie Products markets for is Riley Esser, a residential plumber and hobby farmer from Perham, Minn., who raised two acres of hemp in 2019. He says he is happy with the split contract and has high hopes for Prairie Products and its competitors.

“I think it’s really exciting and I think the United States has been out of the hemp game for way too long,” he says.

The processAt Prairie Products, workers put the hemp biomass into an 8-gallon vessel of 190-proof, denatured alcohol. They soak it 15 minutes to 25 minutes. This dissolves the oils. (The processing facility typically has fewer than 120 gallons of ethanol on hand.)

Later, they evaporate the ethanol off for reuse, a first stage of distillation that leaves the final plant oil separate. They use a “decarboxylation” process to convert it to the CBD form, and wring the last of CBD out with a screw press. The ethanol product is recycled in the process about nine times before it is exhausted.

About 35% of the CBD market is in tinctures — a mix of a CBD with another carrier oil, such coconut oils. The consumer might use a small bottle and administer drops to the mouth.

A second market is for spray-dry products or gelatin capsules. A third product is topicals, which are lotions or products to rub on the neck for some healing effect.

Prairie Products was established under another name in 2013 and reorganized in October 2017 and aimed its energy at the CBD oil from hemp. Company officials come from the Red River Valley area, but with varying backgrounds.

Kevin Soiseth, 56, of Fargo, is the director of quality, also an investor. Soiseth says one of the issues of quality control is that CBD oil is largely “unregulated.”

Veronica Michael, 47, is the company’s chief executive officer and director of sales and marketing.

Michael says there are more than 20 shareholders — half Red River Valley area farmers and the rest medical professionals. Because of the risk in an emerging market, the company raised funds from “qualified” investors, meaning they needed to have a net worth of more than $1 million and annual income exceeding $250,000.

The company sold about half of its allowed 10,000 equity shares. Investors had to put in a minimum $32,000 for a single share. Michael says the company is no longer actively promoting equity shares but has applied to the North Dakota Development Fund through the North Dakota Commerce Department. They are also applying for an Agricultural Products and Utilization Commission grant with an aim toward taking some of their crude oil to a distillate product.