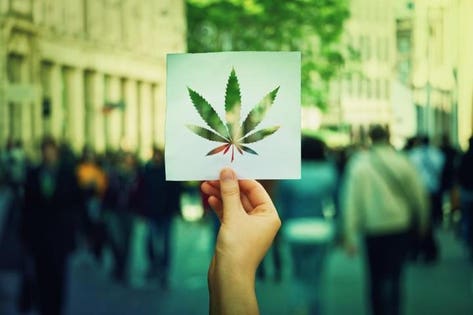 A hand displays a paper sheet with a cut-out marijuana leaf over a crowded street background. (Stock via Getty)Getty

Emojis play a major and evolving role in modern communication, but representations of cannabis have kept out of the picture. Medical patient Jessie Gill hopes to change that in 2019, and put an important tool for awareness at our fingertips.

Over the past year, Gill has worked to gain support for cannabis emojis through online petitioning and her upcoming proposals to the Unicode Consortium, which manages the little symbols we see. The group plans to roll out its newest batch in March, following deliberations early this year.

So far, Unicode has declined to add a cannabis emoji to its collection — currently at 2,823 different, carefully chosen pictures — and five previous applications were turned down, Gill noted. There have been some workarounds to this issue for iOS, but nothing official; on Android, I use a combination of leaves, evergreens, and palms.

Gill, a New Jersey-based retired nurse, current health blogger, and mother of two, said in a phone interview that she herself was cautious for years about medical cannabis due to unawareness, and certainly stigma.

Then, several years ago, Gill began to suffer from chronic pain that interfered with her work as a Hospice nurse. It was also difficult to treat safely. “I’m a pain expert, and I knew the side effects of the pharmaceutical drugs I was taking, but I was still resistant to cannabis.”

As the toll on her body rose, Gill said, “I started this very reluctant journey into cannabis medicine, and was blown away by how significant the impact is.”

Already a health blogger, Gill soon adopted the moniker Marijuana Mommy, and began publishing health- and cannabis-focused content. She also began taking speaking engagements on CBD and founded PrettyPipeShop, whose mission is “to supply smokers [and] vapers with the prettiest tools and accessories available,” according to the site (which also states that products are only meant for “tobacco and LEGAL herbs”).

See also: Over Uber And Lyft? These Apps Hail Rides Or Book Ahead

A cannabis leaf is shown atop a stethoscope. (Illustration via Getty)Getty

Gill also launched a Change.org petition, and started working on an official proposal to the Unicode Consortium for multiple cannabis-related emojis. With the help of a digital designer, Gill plans to submit proposals over the next few months for an emoji medicine bottle with a green cross on it, and for an emoji hemp leaf.

It’s a process she said involves “a whole schedule of steps [applicants] have to follow,” and takes at least a year. Another part of the process, Gill said, is having frequent requests for that symbol from emoji users.

“The cannabis leaf is so needed, so important. I don’t know if they’ll actually go for it, but I do feel like I have a really strong chance of getting a bottle with a green cross on it approved, to represent cannabis oil or tincture, or even holistic medicine.”

“I will push like heck for a pot leaf emoji,” Gill added. “I’d love to submit a proposal for a medical marijuana symbol, a hand-rolled cigarette, a water pipe, and red-eyed emojis, too.”

See also: Sex Workers And Immigrants Are Under Attack. Don’t Like It? Send DC A Fax

Like cannabis, Gill said, emojis are becoming “a significant part of our society.”

Among other things, they can help communication to flow between people with different native languages, or with different language-processing abilities, as following head trauma or stroke.

“The data is there making the argument that we should really have it. The psychology behind it is deep: it’s not just a little picture, it’s really about inclusion.”

“I think it’s so, so important for ending stigma [about cannabis] to get this emoji out,” Gill continued. “I became a patient very reluctantly because I just didn’t know about the benefits. I didn’t want to be a mom who used marijuana.”

“This could make a huge difference.”