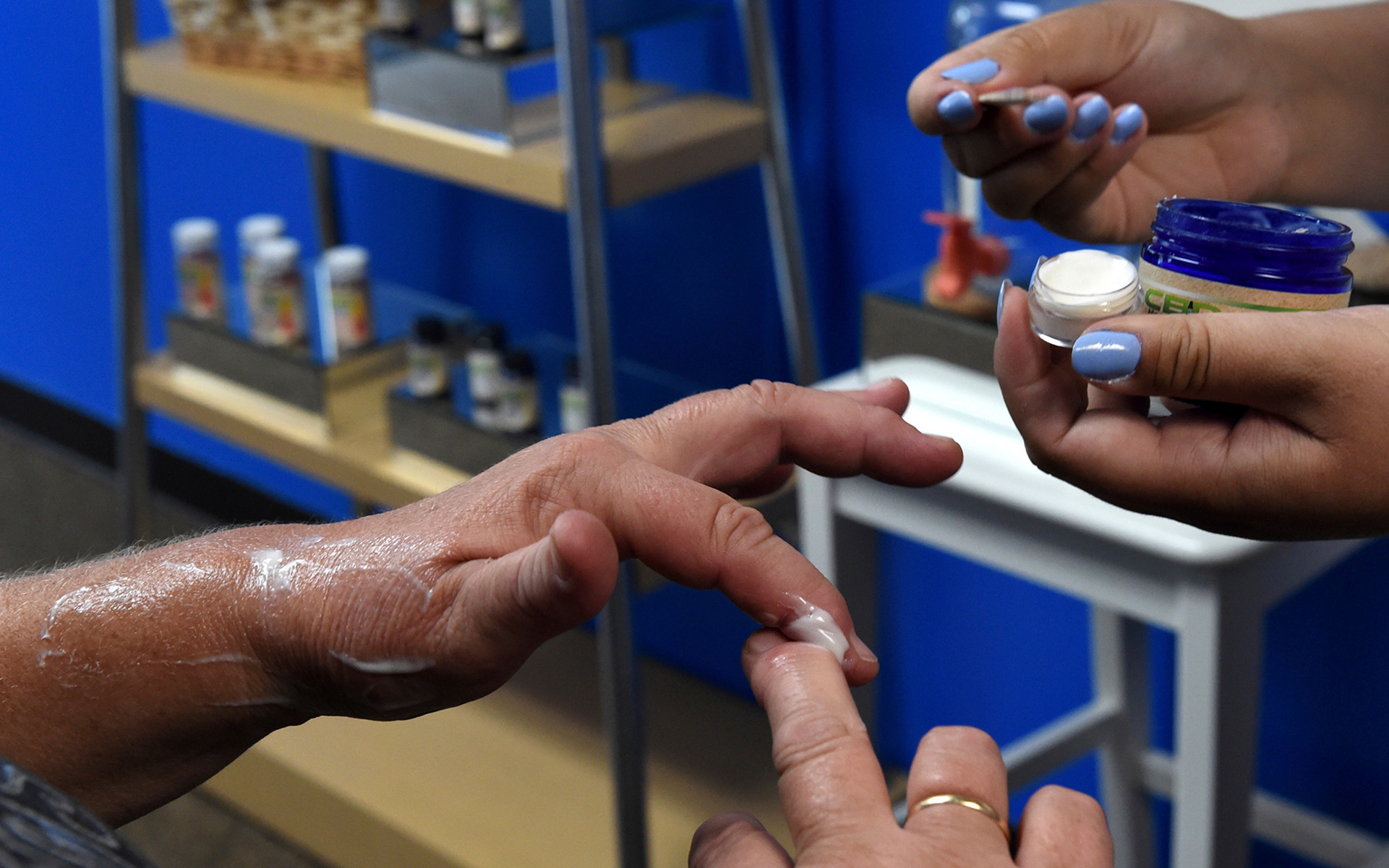 NEW YORK (AP) — Mainstream retailers are leaping into the world of products like skin creams and oils that tout such benefits as reducing anxiety and helping you sleep.

The key ingredient? CBD, or cannabidiol, a compound derived from hemp and marijuana that doesn’t cause a high.

CVS, Martha Stewart, and Neiman Marcus are selling CBD products. Walmart and Target are holding off for now.

Retailers are taking advantage of the booming industry even as its legal status and health benefits remain murky. And the flood of products is only testing how federal regulators can police it.

Retail sales of CBD consumer products in 2018 were estimated to reach as much as $2 billion, according to Cowen & Co. By 2025, that figure could hit $16 billion in retail sales, the investment firm predicts.

CBD has been cropping up in everything from dog treats to bath balms in the past few months. Domestic diva Martha Stewart is working with Canada’s Canopy Growth Corp. to develop new CBD products. Authentic Fitness is planning to sell CBD foot creams, oils and soaps under the Nine West brand starting this fall. CVS Health is beginning to sell CBD-infused creams, sprays, lotions and salves at more than 800 stores in seven states; drug store rivals Walgreens and Rite Aid are now following suit. And the nation’s largest mall owner, Simon Property Group, has hooked up with a cannabis goods maker to open roughly 100 kiosks at its U.S. malls by mid-summer.

Neiman Marcus Is Getting In

Even high-end retailers are getting in on the action, charging anywhere from $12 to $150 an ounce. Barneys New York has opened a shop in Beverly Hills, California, that sells CBD-infused creams along with hand blown glass bongs and other accessories, while Neiman Marcus is now offering an array of CBD-infused beauty products from balms, lotions soaps and masks in five of its stores.

He acknowledged, however, the legal hurdles are still hard to navigate and companies should take it slow.

Walmart, Target, Amazon: Not Yet

Indeed, some are doing just that. Walmart says it doesn’t have plans to carry CBD-infused products at this time and Target, which in 2017 sold hemp extract products on its website but then quickly yanked them, said it’s monitoring the situation.

Meanwhile, online behemoth Amazon is staying clear of the stuff. Spokeswoman Cecilia Fan says the company prohibits the sale of products that contain CBD and will remove them from its site if it sees them.

CBD’s ubiquity persists despite very little evidence for all the health claims the industry touts. If you believe in the hype, CBD treats pain, reduces anxiety and helps you sleep and keeps you focused. But most claims are based on studies in rats, mice or in test tubes. Human research has been done but on small numbers of people.

Only drugs that have been reviewed by the U.S. Food and Drug Administration as safe and effective can make claims that they treat or prevent diseases or medical conditions. Many CBD producers try to get around that by using vague language about general health and well-being.

That seems to be good enough for at least some shoppers eager to calm their nerves.

“We are a more anxious society and people are looking for cures,” said Kit Yarrow, a consumer psychologist and professor at Golden Gate University in San Francisco. “There’s a growing distrust in business and pharma and so people are wanting to find cures that seem more real and wholesome.”

Seems to Work for Some

Amy Nichols, a former food scientist from Indianapolis, reflects that distrust. Nichols, 46, who’s been battling symptoms from autoimmune illness, has been using CBD oils by a brand called Recept that she sticks under her tongue.

“For me, this is a more natural solution to treating symptoms that I am having instead of taking pain killers,” said Nichols, who now works as a sales representative for Recept. “I have more energy. I get more done. I am in less pain. I am more active.”

CBD is operating within a patchwork of regulations that vary by cities and states. In New York City, regulators are prohibiting outlets to sell CBD-infused food and beverages, threatening them with fines. Other states like Ohio and California are taking similar action. Maine’s governor, on the other hand, signed an emergency bill in late March allowing CBD in food products after state inspectors warned stores to pull them from shelves earlier in the year.

The farm bill, passed late last year, gave states and the U.S. Department of Agriculture authority to regulate industrial hemp, a type of cannabis that is high in CBD. That opened the door to hemp-derived CBD products.

CVS and Walgreens are sticking to topicals. Others are rolling the dice and selling CBD-infused drinks and supplements.

But the farm bill gave the FDA authority over the food supply and the agency recently warned that it’s illegal to add CBD or THC—the compound that gives marijuana its high—to human or animal food and beverages and transport it over state lines. Dietary supplements using CBD are also illegal.

Bigger players like CVS and Walgreens are sticking with skin creams and lotions where the FDA hasn’t specifically expressed concern. Others are rolling the dice and selling CBD-infused drinks and supplements anyway in hopes of a profit, said Whitt Steineker, a Birmingham, Alabama, attorney who advises the hemp industry.

“They have determined the reward is worth the risk,” Steineker said.

With rules and guidance still being written, the landscape is highly uncertain but Steineker expects that to improve.

“Now that hemp is legal, I think the USDA and state departments of agriculture are interested in seeing what type of crop it will be and what its applications are,” he said. “They’ll move with the speed governments often move with … (but) by the 2020 growing season, people will have a better understanding how to operate within the law.”