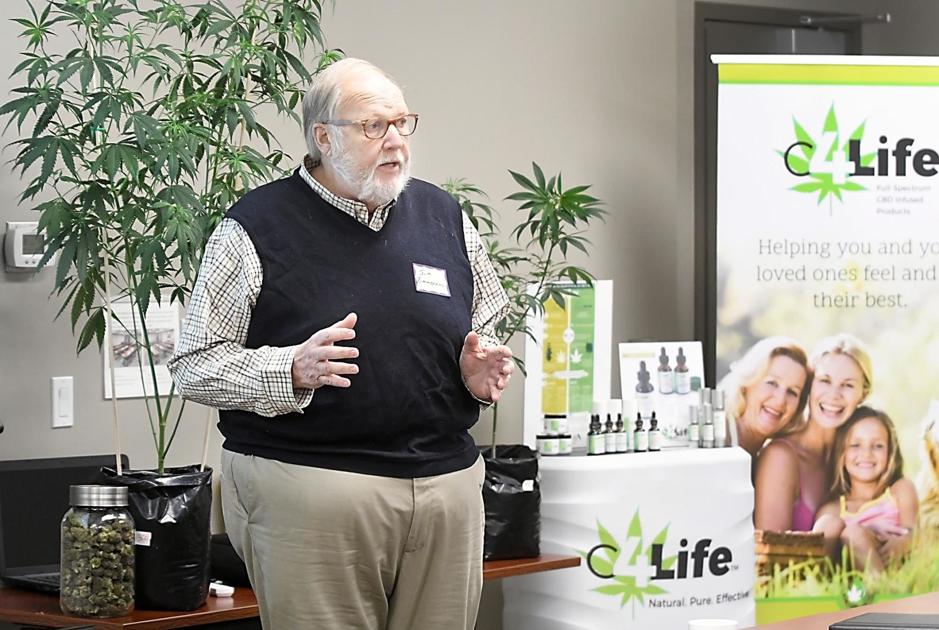 The variety of products coming on the market and being tested by companies has exploded in recent years and the latest farm bill making industrial hemp a legal farm crop has rocketed hemp to the forefront.

“It’s a very immature marketplace. When we get going, we can absolutely crush the competition,” said Matt Little, who with partners started Midwest Hemp Farms in Waseca.

They began growing hemp in a greenhouse and in fields under a state ag department pilot program.

Little and others said the fertile soils that make growing corn so productive here is also perfect for hemp, giving the region a leg up on other states.

“Our focus is creating an ecosystem for farmers, the seed, harvesting, drying,” he said. Little is working with area farmers to grow more hemp on contract.

Jim Zimmerman, with C4Life Inc., a wholesaler for CBD oil and other products, said if the Minnesota hemp industry can get a brand recognition for quality hemp production and products, it can be like Idaho is to potatoes and Washington is to apples. He said people pay more and buy more of those apples and potatoes because of the brand recognition.

Dave Rye, of C4Life, said the Minnetonka-based company, which started just six months ago after more than a year of planning, already has 250 products on the market. They’re selling them in smaller stores now but next aim for the likes of Target and other major retailers.

Those in the fledgling industry say they need the state to set up regulations to test and ensure hemp products are as advertised and that shoddy, even dangerous products aren’t on the market.

And while the farm bill opened the door to hemp production — which was widespread in Minnesota up until the 1940s — federal agencies such as the Drug Enforcement Administration and the Food and Drug Administration are just beginning to figure out how to classify hemp — a cousin to the marijuana plant — and its products.

“Right now we treat it like a dietary supplement and don’t make any claims (about its health benefits),” Rye said. CBD oil and related products are championed by many who say they relieve chronic pain, reduce depression and help with a variety of ailments in humans and pets.

Mankato developer Mike Drummer, who sold the Waseca greenhouse to Little, is one of those CBD champions. Drummer said after he began taking CBD oil, a lifelong affliction that caused his legs to twitch and cramp disappeared.

Drummer has been working with Little’s group and with the Mankato company Fiberon Decking to find ways to use the stalks and fiber products from hemp plants after the seeds and oil have been removed.

Fiberon, in the former Phenix Biocomposites plant, makes decking consisting of ground-up carpet fibers and sawdust. The decking, sold at Home Depot and other large retailers, has been successful, but Drummer said its production faces some challenges. The tens of millions of pounds of sawdust have to be shipped in from far northern Minnesota and the Deep South where furniture building is centered.

Fiberon is testing using the local hemp fibers rather than sawdust, something that would make their decking much lighter and less expensive to make, while giving hemp farmers an additional income flow.

Drummer said there’s a variety of other research going on, including mixing plastic and hemp to make light, durable plastic pallets that would reduce transportation costs and create a product that’s half organic. Others are testing hemp for items such as ceiling tiles and as a replacement to Styrofoam.

Riley Gordon, of the Agricultural Utilization & Research Institute in Waseca, said they have been working on ways to bring added value for farmers through hemp byproducts, including potentially using it in animal feed, cabinet making, straw-board plants and other uses.

There are two types of hemp plants, tall plants used for making fiber products and short plants used to extract oil and other elements as well as producing some fiber byproducts. While related to marijuana, the hemp must be below 0.3 percent THC, the element that gives the high in marijuana plants. Under the pilot program, the state has been testing hemp plants to ensure they are under the THC level. Plants that go over have to be destroyed.

Little said the current hemp industry across the country is a Wild West mishmash of legal and illegal marijuana growers, those producing high-quality hemp seed and products and those selling “crap” CBD oil and hemp seeds that won’t grow well or are too high in THC.

He hopes Minnesota lawmakers get on board quickly to regulate the industry to ensure legal growing and production and quality products. He said the legalization of recreational marijuana in Minnesota will happen in the coming years, but he hopes they don’t legalize it soon as it would only bring more complications.

“I was in Oregon (which has legal recreational marijuana) where I went to more illegal marijuana grows than legal ones because the state isn’t regulating it, no one’s watching,” Little said.

“There are all these products that could make a dramatic change in southern Minnesota and the Upper Midwest.”

The Coronavirus Epidemic In Birmingham, Ala. Seen Through A Doctor With The Disease – North Country Public Radio